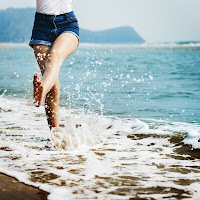 I turned my back to the window and faced the interior of the room.  Suddenly, in a flash, it was daylight.  I was watching a silent movie in living color.

Listen to My Paranormal Vacation Here

"My Paranormal Vacation"  is courtesy of Karen King

I spent the summer between the 10th and 11th grade at my grandmother’s house in upstate Michigan.  It was my first visit to her house.  Usually, she would visit us (where ever we were in the world).  When I was much younger, we all lived in that house with my grandparents; but, I was in diapers then and I don’t remember anything about it.

So on the day of my arrival, I felt as though I was seeing her house for the first time.  I was impressed by the grandeur of the enormous old Victorian mansion. At that time, I lived in a much smaller house with my mother and stepfather on a military base in Germany.  Grandmother’s house looks like something out of a movie.  It was in the middle of nowhere on a big lake and had several acres of land (that was covered in evergreen trees).

About one hundred yards from the side of her house was our private family cemetery. The last time that I had come to this house, we had buried my father there.  He had been killed in the Korean War.  Again, I didn’t remember any of this because I was in diapers then.

That first day, grandmother and I kneeled at my dad’s grave and said a silent prayer.  I felt strange when she started crying.  I felt that she expected me to cry too; but, she knew daddy as a living person.  I only knew him from photographs and other people’s memories.  I tried; but, I could never cry for him.  He was a stranger to me.

We went to bed around eleven PM.  I was restless.  I couldn’t get to sleep.  It takes a while for me to adjust to sleeping in a new place. About midnight, bored, I decided to go exploring.  I ended up in my father’s room.  Grandmother had not changed anything.  It looked like he had just left the room a few minutes ago.  I was standing in the dark, looking out the window.  I could see our family cemetery illuminated by the moonlight.  I remember feeling very sad.  I felt that a part of me was missing and I would never have it again.

I turned my back to the window and faced the interior of the room.  Suddenly, in a flash, it was daylight.  My father was alive.  He was pacing the floor holding a baby in his arms.  He swayed and sang to the child; but, I couldn’t hear any sound. I was watching a silent movie in living color.

Then, a wave of emotion washed over me.  I was inside that baby.  It was me that he was holding.  As he held me, I reached out my hand and touched his face.  I could feel it.  I could see his eyes and smell his breath.

Then, as suddenly as it had turned to day, the night resumed.    I was alone, in his darkened room standing with my back to the window. Tears were flowing from my eyes and down my face.   I was hysterically screaming “Grandma! Grandma!  I remember him!  I remember him!”  "Daddy, Daddy, I remember you!"