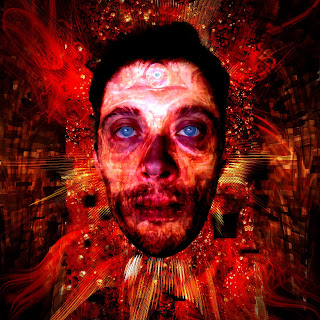 Is it possible that the power of belief has enough creative strength to will ghosts into existence?  Through five community member stories, we explore that theme.

I was riding a three-wheeler ATV

with my girlfriend in the field beside her house.  We were going to fast when we encountered an unexpected dip in the ground.  We went flying over the handlebars and I landed with a thud on a rotting tree stump.  I was wearing a helmet; but, I hit my head, so hard, it cracked the helmet.  The impact knocked me unconscious.

I woke up with blurred vision and a throbbing headache.  As I recall it, I was laying on my back in the field, in pain, staring up at my girlfriend Jill.  She was crying and screaming something that I couldn’t understand.  Everything was moving in slow motion and in a blood tented hue.  I know that I was looking at my dad standing behind Jill.  He was looking over her shoulder at me and there was a look of deep concerned on his face.  It occurred to me that he shouldn’t be there at all.  He was dead?  He was wearing the clothes that we had buried him in.   His mouth was moving.  He was saying something that I couldn’t hear.  I knew then that I was badly hurt and hallucinating.  I remember softly saying, “Daddy.”  Where did you come from?  Then I passed out.

The next day in the hospital, Jill came for a visit.  My mother made an excuse to leave the room and give us some time alone.  Thank goodness, Jill only had minor scrapes and cuts.  She took off her shoes and curled up on the hospital bed next to me.  She laid her head on my chest and listened to my heartbeat.  Then she lifts her head.  I noticed that her eyes were moist from tears.  When our eyes met, Jill asked, Jimmy, did you know that your dad was out there too?


On Jones Road from Walt Schmitt

I live in a rural area in British Columbia

.  There are lots of woods.  The main thing we have to worry about when driving on the roads around here is hitting a deer.  I was speeding down Jones Road, with my high beams on, headed to Wall Mart.  I was trying to get there before it closed.  In my headlights, I could see something big like a big bear on the right side of the road getting ready to cross.  I jammed on my breaks but I was moving too fast to completely stop.  I slid into it.  I know that I hit it because I felt and heard the impact.

A little further up the road, I was able to stop the car.  I didn’t want to get out of the car because if it was indeed a bear

that I had hit, it wouldn’t be safe.  So, I turned my car around and drove the few yards back to where I had hit the bear.  At that time, I only had one headlight still working.  I didn’t see the bear.  I guess it had crawled into the woods.

The next morning, I returned to the location on Jones Road where I had the accident.  It was easy to find it because the broken parts of my car that had been torn off were still laying on the road.  I got out of the car to pick up the broken parts.  It was then that I noticed the enormous footprints in the mud along the side of the road.  Judging from the size of the footprints, I didn’t hit a bear.  I hit a Bigfoot

.  I made some plaster casts of the footprints.  I have them in my den today.  Just about everybody thinks they are fake.  They also think that I hit a bear


The Gong from Larry Peters

The first time that I recall something possibly supernatural happening was when the couple next door invited me over to watch the last game of the final four basketball tournament on their enormous TV screen.  We had moved into the complex on the same day and we were determined to be friends.  They had a small Chinese style dinner gong

displayed on a table in their entry hall

.  While we were watching the game we suddenly heard that gong loudly ring seven times.  It rang with force.  It sounded like it had been struck by someone using a hammer

. We were all startled, dinner gongs just don’t ring themselves.  We looked it over but we could not find a reason that it rang.

A week after that, the couple moved out.  They told me strange things were happening in that apartment.  The gong kept ringing all times of the night.  It was made stranger by the fact that they had placed the gong in their storage unit.  It wasn’t in the house any longer.  They decided it’s best to leave.  They lost their deposit and a least two weeks rent when they moved out.  I could never afford to do that.

The night, of the day that my neighbors moved out, I also heard that Chinese dinner gong ringing.  This time it was inside my apartment.  Over two months, the ringing kept me up at night.  I was sleep deprived and angry when I broke my lease.  I lost my deposit on the apartment.  My sister Sue and her husband Tom let me stay at their house until I could save for another place.  The first night there, we all heard the gong ring seven times on and off throughout the night.  It has rung every night since then.


The Smartwatch from Abby Franken

I bought a smartwatch

for my daughter.  I just felt that no matter what else happened that this watch would keep her safe.  The watch has a panic button.  When it is depressed it sends an alert to my phone.  From my phone

, I can see my daughter’s location and I can activate a microphone that allows me to hear the background noise wherever she is before I speak to her.  It could also tell me if her heart is still beating.

Last Thursday, I got a notice on my phone that the distress alarm on her watch had been activated.  Thinking the worst, I activated the location finder and confirmed she was at school.  When the microphone activated, I could hear children screaming in the background.  I started calling my daughter’s name “Shelia” but she didn’t answer.  I was scared out of my mind but I called the police.  When I got to her school, my daughter was waiting with her schoolmates.  They were under police protection.  She came up to me and we hugged and kissed.  Then she told me the strangest thing I have ever heard.

The shooter was one of her classmates. The kid brought the gun to school just to impress some friends.  He dropped the revolver (a .22 caliber pistol

).  It was loaded and it fired when it hit the floor.  The bullet, only one fired, it hit my daughter’s watch and activated the panic alert and then lodged in a wall.  She suffered a fracture of her left wrist; but, other than that, she was fine.  I hope that she does not have delayed stress syndrome

.  The watch deflected the bullet.  However, it was damaged.  The police have it now.  I'm not sure how this is paranormal

but I believe incredible luck is itself a paranormal event.


We All Believe Now from Tassa Lee

Shirley and her two children, a boy (eight years old) and a girl (five years old), were homeless after her mother died.  They had depended upon her mother’s social security check to help them pay the rent and eat.  They lost their apartment.  Now, all they had was an old car to live in.  They would park at Walmart so they could use the toilet and eat most days.  They waited at a seven eleven store when Walmart was closed.  That is how they were living before this incident occurred.

Through a pastor, at a shelter that they stayed in, they were given an opportunity to live in a house for free. The house needed some major work; but, it was habitable.  They were allowed to stay there while the owner made repairs.  The owner just wanted someone on site to discourage theft and vandalism.  There was one other thing, the house was believed to be haunted.

Shirley was desperate and didn’t believe in ghosts. Within hours of learning about the house, they moved in.  The place was a mess but it was livable.  After cleaning the living room, the kitchen and the bathroom.  They unloaded their car and moved everything into the Livingroom downstairs.  It was very late and the remainder of the house would have to be cleaned before they could spread out.  They lay quilts, blankets, and pillows on the Livingroom floor and tried to sleep.

In the stillness of the night, they heard children’s voices and their running footsteps coming from upstairs.  Shirley told her kids to stay downstairs while she investigates what was going on.  With a flashlight in hand, she begins to ascend the stairs.  She called out for whoever was upstairs to come down.  Then she heard children upstairs laughing.  As she went further up the stairs, the louder the laughter became.  With a booming commanding voice, she demanded that they come downstairs now and stop this foolishness.

Then the children stop laughing and the house was silent again.  That’s when the whispering began. She couldn't make out what they were saying.  Upon hearing the whispering her children begged for her to return to them.  They were scared.  They all felt the house getting colder. That’s when they heard the classic “Get Out!” Thunder and echo throughout the house.  The kids were already at the door with the blankets when Shirley came running off the stairway.

They all piled into their old car.  They spent the remainder of the night at a local seven eleven store.  Shirley called the owner of the house as soon as she could the next day to tell her what happened the previous night.  The owner didn’t seem surprised.  She arranged for Shirley and the kids to stay at another of her houses.  She also personally retrieved the items they left behind and delivered it to them.

The family is much more stable now.  Sometimes, Shirley drives by the old house out of curiosity.  That house was torn down to make room for a new house.  However, no one stays in the new house for long.  It seems to be always empty and available.


The Music for this episode: