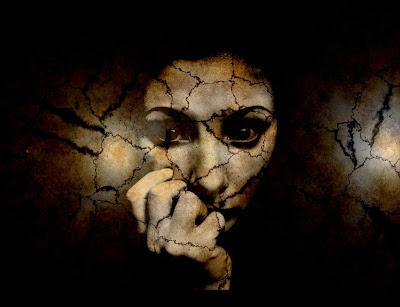 In this episode, we examine eight of unexplained paranormal incidents from community members.

Listen to The Painting Changes Here.

Wasn’t Scared Then But I am now from John B.  It’s called

It was three A.M on a Sunday morning, everyone in the house, but I was asleep.  I took a break from the video game

that I was playing to get a beer

.  At night, the only light I keep on in the house is in the hallway.  That light is just a dim night light plugged into the wall socket.  I had gotten my beer and I was returning to my bedroom.   Passing through the hallway, this time, I got a strange feeling that I was being followed.  Plus, the light in the hallway had brightened beyond dim.  I slowly turned around.  I could see a luminous misty white blob floating directly behind me.  It looked and floated in the air like a jellyfish floats in the ocean.  I wasn’t scared because for a short while I thought that I was dreaming.  So, I reached out my hand to touch the blob and it backed up.  I took a step toward it again and it backed up again.  However, this time I thought I could see my face on its surface.  I stopped and just stared.  I was curious about what it could be.  I had the feeling that it was intelligent and curious about me.  We spend at least two minutes just assessing each other.  Then it floated through the roof.  I don’t think it was a ghost.  It was some type of intelligent being.  I wasn’t scared then but I am now.  I wonder what it is.  Why was it in my house and is it coming back?

A New Friend from Cynthia T.

I leave my job at ten pm on weekdays.   I have to take two buses to get home.  At that time of night, one of the bus-stops that I wait at is isolated and lonely.  Very few people are around.  Often, I am alone there.  I’m always happy when the bus arrives and I can get away from there.   One night, I was waiting there with another lady about my age.  We had a good conversation going about our favorite music groups and TV shows.  We sat there for twenty minutes or more.  We were the only two people at the bus stop.  When my bus arrived, I was happy to discover that she was also taking the same bus.  I thought maybe I could make her a friend.   I went on the bus first and she followed close behind me.  I paid my fare and grabbed the first open two seats for us.  As I sat down, I looked back for my new friend.  She wasn’t on the bus.  I look back to the bus stop and she wasn’t there either.  As the bus driver pulled away, I ask him what happen to the woman who was behind me.  He said that I was the only person at the bus stop when he arrived and no one got on with me.   As I was riding on that bus home, I was replaying the entire situation in my mind.  On the back of the driver's stall, I noticed a public service posting for a missing person.  The person was the woman I had spoken with at the bus stop.  She was last seen at that stop.  I’m still using that bus stop but, now, I worry that I might run into her or her killer.

The Dumping Ground from Tracy W.

I inherited some land in the country from my father.   Until three months ago, I had only been out to visit the land twice.  The location is beautiful.  Its forty acres of trees on a small lake.  It was once a summer camp

.  I packed up my kids and we set out to spend the weekend camping

on the site.  We set up our tents along the lake and settled in.  That first day the kids went swimming

and exploring the land.  They were having a great time.  Late that afternoon, my daughter’s stumbled on to a small overgrown graveyard.  I was unaware that one was located on the property.  So, guided by them I went to see what they discovered.  We found gravestones

from the 1830s up to the 1920s.  We also found that someone had dug fresh graves only a few weeks old.  We packed up and headed home.  A few days later, the county sheriff discovered that someone had been using our land as a dumping ground.  They found the bodies of eighteen men and women who had been buried over twelve years.  They were able to identify several as missing persons.  The remainder is still a mystery. They haven’t found the person or persons who did it.  On the way home, after the discovery of the new graves, my oldest daughter looked at a photograph

she had taken of the graveyard on her phone.  On a few of the photos, there was the shadow of a woman in modern clothing staring at the camera


Scratching at My Door from Sam M.

Last Sunday, I was watching the Seahawks football game on TV when my dog started scratching on the door for me to let him in the house.  I didn’t want to miss one moment of the game.  So, I made my son get off the couch and let Hero in.  As he was walking to the door, he spotted Hero laying under the coffee table.  He pointed to Hero, then he went to the door to find out who was scratching.   There was no one at the door.   We agreed it must have been the wind.  As we continued to watch the game, again we heard scratching and this time barking at the door.  My son and Hero both got up to investigate.  When the door opened my son found that no one was there again.  This time Hero ran outside barking and growling as though he was chasing something.  My son called Hero back into the house.  We settled down to watch the game again.  A short time later we heard scratching and barking at the door.  Hero went to the door and barked and growled at whatever was outside.  Then whatever was outside growled at Hero.  The growl was so ferocious it scared me and my son also.  Hero retreated and hid under the coffee table.  I peeped out of the window and found nothing.

The Painting Changes from Felix A.

In her bedroom, my grandmother hung a painting of a rural landscape.  The landscape shows a cottage on the edge of an open field.  An ocean was far in the background. Because I spend so much time with her, when I was small, I noticed something odd about that painting.  First, over an extended period of time, the seasons changed, animals, plants, and people appeared and disappeared from the painting.  Sometimes the field was planted.  Sometimes it was harvested.  Sometimes it was empty.  Sometimes the ocean was calm and other times, it was, stormy.  The weather, at times, had rain, snow, or clear skies.   It appeared to be more of a window on a distant world than a painting.  In the painting, people moved very slowly.  They were living in another dimension.   I asked my grandmother about their world.  She said that it was my imagination.  The rest of my family thought so also.  They said the painting always looked the same to them.  When my grandmother passed away, the family had many disagreements about who inherited what property.  The only thing that I wanted was that painting.   It hangs now in my bedroom.  In the painting, the seasons, the weather, the ocean, the landscape, and the people still change over time.  Recently, a new person appears to be living in the cottage.  She looks just like my grandmother.

An Embarrassing Story from Gina C.

I recently checked into a bed and breakfast in Savana, Georgia.  When I was checking in, the clerk warned me that he was placing me next to a room that was undergoing repairs.  So please call the desk if it gets too noisy, he said.  Not a problem I told him.  I'm just here for a night. It was already late afternoon.  I went to my room and dropped off my bags.   Soon I was bored. So, I looked around the house.  Out of curiosity, I decided to check out the room they were repairing.  The door was locked.  The house has original skeleton keys for all the rooms.  So, I peeked through the keyhole.  The room was empty.  It had no furnishings but a young woman was sitting on the far side of the room in a rocking chair looking out of the window.  That was weird I thought.  Was it my imagination?  I looked through the keyhole again. We met eye to eye.  Startled, with a quick apology made through the door, I retreated to my room.   The next morning, a new clerk was on duty.   I told her the whole embarrassing story.  I asked that she give the occupant a note with my written apologies.  The clerk said, no worries sir.  There was no one in that room.  We don’t rent it out because our guest complained that it’s haunted.

The Phone Call from Harry W.

In June 2017, my brother died of kidney failure– we were not only siblings, but we were also best friends.  We made a pledge to each other, when we were kids, that if one person died before the other, then that person would send a message from beyond the grave to prove that the afterlife exists.  A month after his death, I received a strange phone call.  The caller id revealed it was my brother’s phone.  When I answered, I only heard noises and someone speaking in the background.  Whoever was speaking was being washed out by the loud noisy static coming over the phone line.   It was a very bad connection.  The type of bad phone connection you hear in old movies.  I couldn’t make out what was being said because of all the noise.  Then it disconnected.  I called the number back but I got an out of service notice.  I had the feeling that Mike was keeping our bargain.   When my brother passed.  I settled his estate.  One of the things I did was end his phone service.   I kept his old phone in a plastic container in my storage unit.  The next day, I dug it out and found, as I suspected, that it had no charge and had not been used.  My phone has the time and date to prove that I received that phone call.  I still don’t know if it was actually my brother.


The Field Trip from Mavis T.

When I was in sixth grade, my class had a field trip to a historic home in our town.  The home was an old Victorian set on three acres of landscaped property.  My class divided into smaller groups to tour the house and gardens.  On the tour of the house, I heard someone playing the piano.  A little further on the tour, the tour guide made the comment that some guest claim to hear a piano playing while they are on the tour.  She asked if anyone was hearing piano music.  No one raised their hand.  So, I kept quiet too; but I did ask her why did they hear the music.  She said people who hear the music had psychic abilities and that the ghosts, who haunt the house, are trying to communicate with them.  The entire time I was in the house, I heard the piano playing but I didn’t experience anything else paranormal.